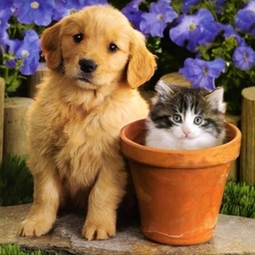 Maybe you are not quite sure if it is the right thing to do. If you're wondering whether you should just leave your dog as nature intended, consider the positive and negative aspects of spaying and neutering before making your decision and make an appointment to further discuss this option.

First, what does neutering mean? Neutering is a procedure used to "de-sex" an animal. This procedure has been used to control animal population growth, reduce unwanted sexual behavior in pets, and decrease or eliminate the possibility of certain disease conditions later in life, such as pyometra or infection in the uterus.

Neutering is done most commonly at or around six months of age. Early neutering can be done safely and has a number of advantages, especially in cases of pet adoption.

Spaying - The Positive Side

Spaying removes the risk of pregnancy.

The following issues can be avoided by spaying your animal. Pet overpopulation is a serious issue and by allowing your dog to have litters, you could potentially be adding to the problem. Finding homes for your new family additions is not as easy as you may think. Even if you choose to keep the puppies, you now have the additional cost of vaccines, parasite control, toys and food for several pets. In addition to costs, the health of the mother can be in jeopardy during delivery. Some new mothers can have serious complications delivering puppies and can even develop health problems during nursing.

Without the drive to mate, your dog may be quieter and not prone to an incessant need to seek out a mate. The spayed dog no longer attracts males and their annoying advances and serenades. Dogs won't have a bloody discharge for several days while they are in heat. Without proper protective products, the discharge can stain sofas, bedding and carpets. Spayed pets are also easier to get along with. They tend to be more gentle and affectionate.

Spaying - The Negative Side

Spaying will result in the sterilization of your dog, and she will no longer have the ability to become pregnant. If you plan on breeding your dog, do not do spay them.

Spaying may cause weight gain.

Some pets may gain weight after spaying and as they get older. Just as with people, to loose weight we need to either diet or exercise. Cutting back on food intake or increasing your pets activity will help reduce weight gain.

Neutering - The Positive Side

Neutering removes the risk of pregnancy.

Pet overpopulation is a serious issue and by allowing your dog to breed, you potentially could be adding to the problem.

Neutering makes for a calmer dog.

Another positive aspect of neutering your dog is that neutering can result in a calmer, and sometimes cleaner, home. Without the drive to mate, your dog may be quieter and not prone to an incessant need to seek out a mate. The neutered dog no longer feels the need to seek out and serenade females. He no longer has the stress of needing to mark his territory and urinate throughout the house and yard. Neutered pets are also easier to get along with. They tend to more gentle and affectionate. Neutered males tend to roam less and typically are not involved in as many fights with other animals.

A final positive aspect of neutering your dog is that neutered pets tend to have fewer health problems. Neutering is the removal of the testicles. Without these organs, testicular cancer is no longer a concern and the risk of prostate problems is reduced. For those people who would like to sterilize their dog but do not wish to alter his appearance, testicular implants are available.

Neutering - The Negative Side

Neutering will result in the sterilization of your dog. He will no longer be able to reproduce, so if you intend to breed your animal, do not have him neutered.

Your dog will look different because his testicles will no longer be present.

Neutering may cause weight gain.

Some pets gain weight after neutering. Cutting back on his food or increasing his activity can help reduce the weight gain.